Then, into the woods we went….

…to where some very similar beads had been found by an old elf. With the help of Hedgehog, Squirrel, Little Owl, the Two Tiny Children who live in the woods and all the lovely StoryHug children, the beads were strung into a necklace for a princess!

If you would like to make your own here is the recipe:

3. Add food colouring or poster paint to the dough, if you would like it coloured.

4. Bake the beads at 75-100C for 30mins-1hour and leave to finish drying on a radiator. Or simply leave to dry without baking.

First we made Woodland Creatures… 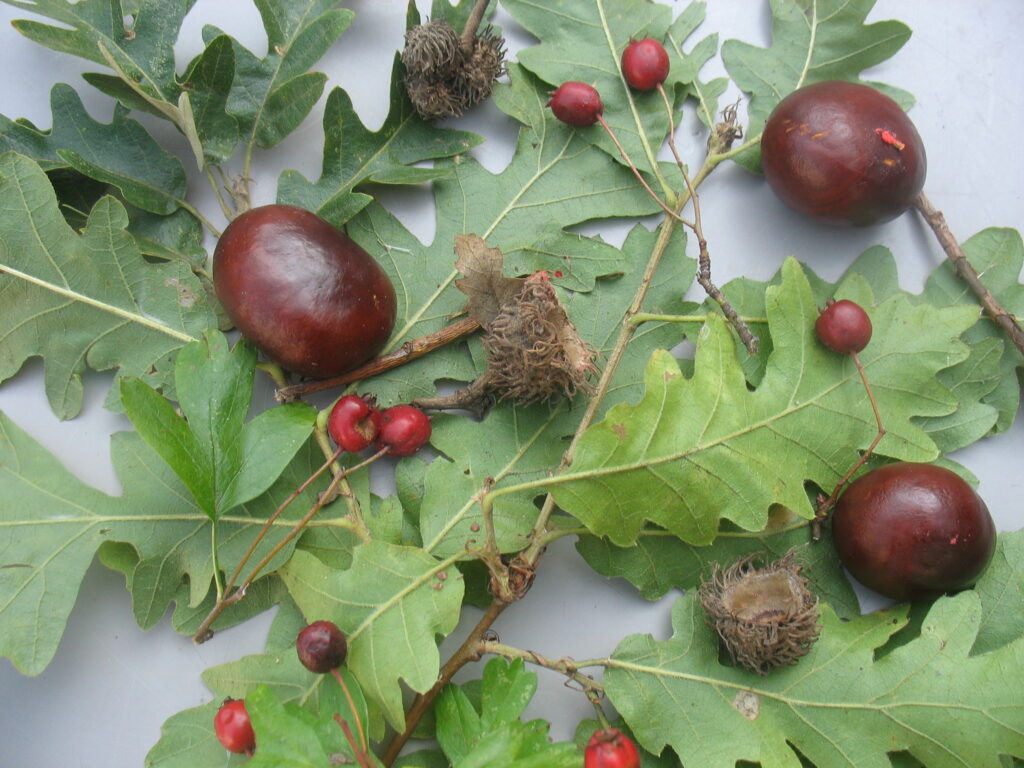 …then we had a story: ‘In Dacres Wood there lived two tiny children: Ena and Tibs…

…They lived in a little wooden house under the trees. At first, the house had nothing inside:

“Waaa! Where will we sit to eat?” cried Ena.

“Where will we sleep? Waaaa!” cried Tib.

But Old Man Elf had left them a bag full of furniture.’

The bag went around our little circle and one by one, a chair, a table, a bunk bed were brought out and carefully put in place by the children: a bedroom upstairs, a kitchen-diner downstairs – such sureness in these little homemakers, such care as they made a cosy little home for Ena and Tibbs to eat a supper of sausages, eggs and baked beans

I had wondered if involving the audience in arranging props might not be a distraction, instead it seemed to pull them in closer into the reality of the tale. The magic of a dolls house, however simple! The real and the imagined blur so seamlessly.

Soon there was a party attended by the Woodland Creatures:

And the story went on, until a little Gnome baby had been reunited with his lost cradle and finally went to sleep while his Gnome Mama had a nice cup of hot chocolate and sat gazing at the milky white moon as the night grew quiet over Dacres Wood.

What you will need:

1.Find a spot with space for rugs or ideally logs for seating.

2.Prop or tie the stick across two trees and drape over a blanket to act as a back drop:

Hold the blanket in place with clothes pegs:

3.Create your tabletop using the baskets, hamper or suitcase:

4.Cover with shawls and scarves:

5.Cover characters to be met later in the story so they can be revealed as the story progresses:

6.Arrange your set. Keep it minimal. Place any props in sequence under the scarves or behind the stage so you can reach for them easily.

7.Tell your story… and enjoy!

The book our daughter chose to take to school this year was Miss Happiness and Miss Flower by Rumer Godden, a story of a motherless little girl, Nona, and two Japanese dolls – all three lonely, miserable, displaced and searching for home. In lovingly creating a Japanese dolls house for the two dolls, Nona finds belonging and acceptance among family and friends in her own new home.

Inspired by Nona we made a little two-room house (out of fruit tea boxes) for our two peg dolls made during a doll-themed Story Hug workshop.

There is something deeply satisfying about making a house for a doll, (however simple!). Perhaps it is the making of a whole other world, or a way of discovering an ideal and practising creating the one true home we search for from our earliest days.

If you are lucky enough to find the 1961 edition of Miss Happiness and Miss Flower, as well as the wonderful illustrations by Jean Primrose you will get plans for the dolls house at the back – so you can make your own! The latest edition unfortunately omits the plans, but it is a wonderful story nonetheless. The sequel, where the dolls meet another little Japanese doll and another little girl is cheered up, is Little Plum.

One Christmas Eve, it was windy and raining and Princess Pearl and her brother Prince Joe had to stay inside the castle all morning long.

“But we always go for a walk in the woods on Christmas Eve!” Princess Pearl complained to the King.

“Maybe later,” he said. “Until then why don’t you go to the library and read a book?”

In the library the children lay glumly on the soft green carpet. Princess Pearl stared at the ceiling while Prince Joe lay on his stomach and gazed at the little clouds of dust gathered under the shelves.

“This.” Prince Joe pulled out a thin old book from under the shelves.

“ ‘The Lost Fairy Babies’”, read Princess Pearl. “Oooh, this looks good! I’ll read it to you.”

It was a story about two tiny baby fairies fallen under the roots of a tree in a forest while their mother was trapped up high, her wings caught in branches.

“What happens to them?” asked Prince Joe.

“A squirrel came along and tried to free the fairy but his paws were too clumsy to move the fine bare branches.”

“Then what happened?” asked Prince Joe.

“A bird came along but her beak was too sharp and nearly pecked a hole in the fairy’s wings.”

“Oh no!” cried Princess Pearl and quickly read on:

“Then an elf appeared from his toadstool home, setting off to look for firewood.”

“Good, his fingers will be just right!” said Prince Joe.

But no, the elf couldn’t get close to the tree because there was a big thorn bush at the bottom. ‘What happens to the poor fairy?’ wondered the children but the last page dropped out of the book and a strange gust of wind blew it up the chimney.