…we made trees of recycled card, leaves, flowers, herbs…

…and we made magical people to hang in the branches of an enchanted wood:

These were to be our ‘props’ for our storytelling session later, and it was fascinating to see the care and concern and intensity of focus that went into the fixing of each petal of a fairy skirt:

…the fine detailed drawing of a wizard: 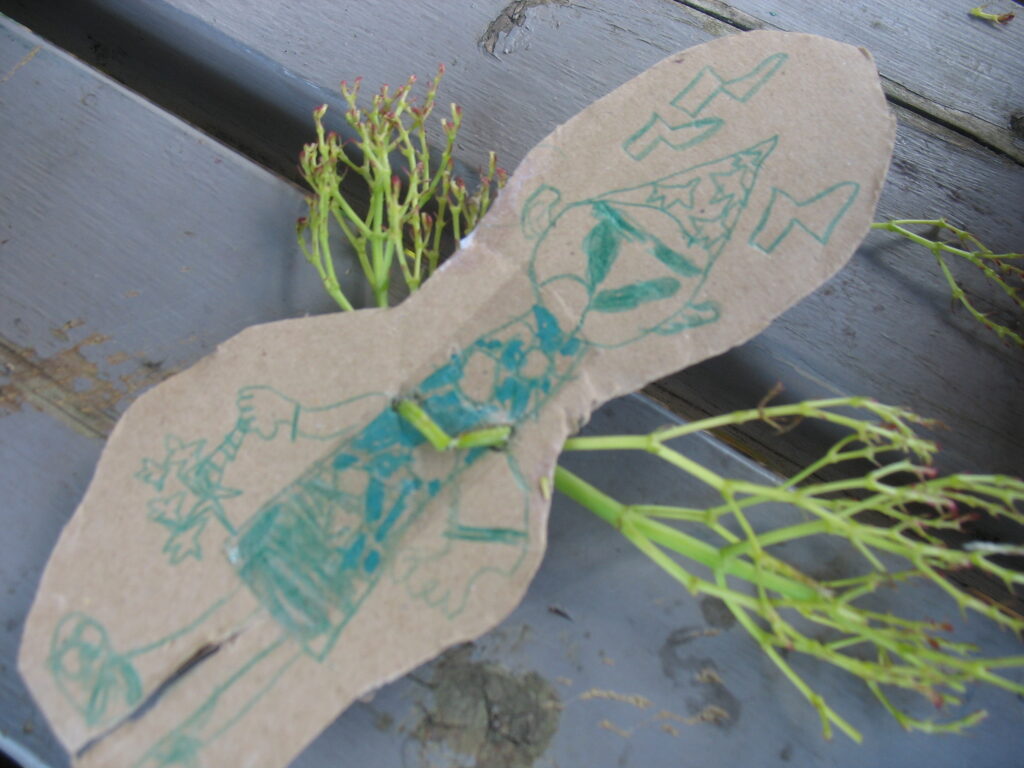 … the carefully considered contribution of a trio of imps based on the young artist and his two brothers:

The fact that these beautifully unique creations were to be used in our stories seemed to lend a deeper significance to them, the children looked so pleased with their work and so proud as I arranged the little handmade forest and hung the magical beings on branches, and they were very deeply engaged in the stories we made together.

Working with our hands and the imagination is a way into the deeper quiet where story parts lie; people and places waiting for their stories to be woven, to be spoken out loud into the open.

At the end, the children sat on their logs in our story circle under the trees, looking thoughtful and dreamy, still lingering in the world we had made together, gazing up at the magical folk above us in the trees… 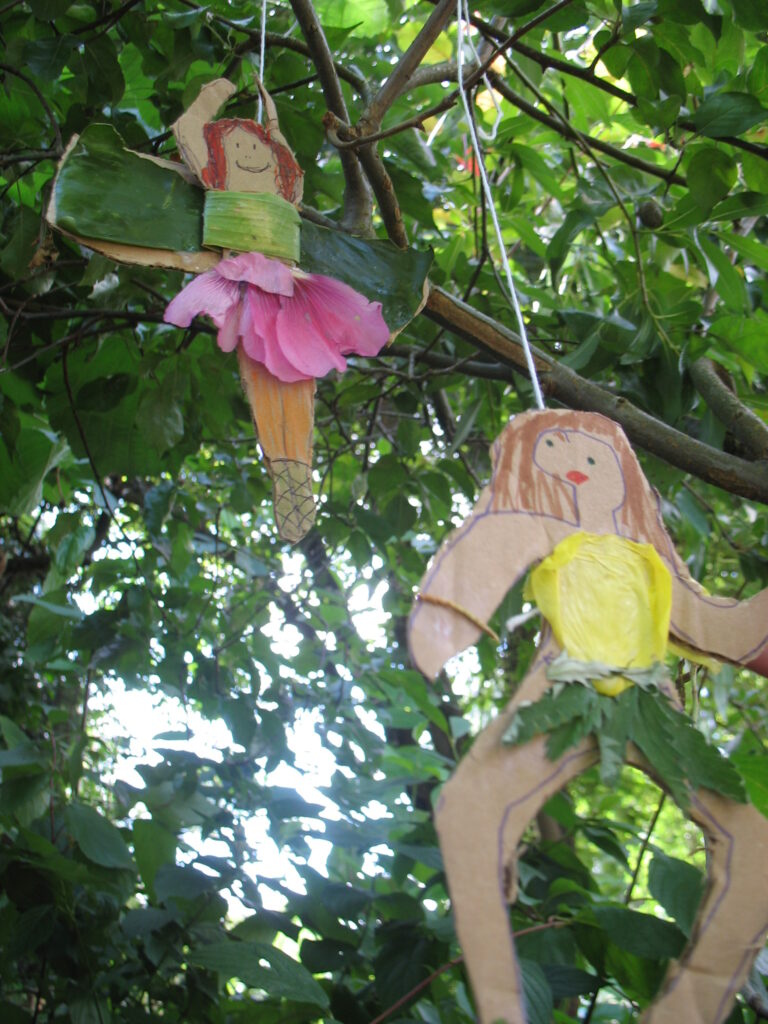 …before running back into the sunshine to play!

Last year I discovered the Storytelling Hut at Emerson College. Through the garden, down the path, behind a hedge…

It is simply a large wooden shed…

it seems normal enough but… it is filled with magic!

The last time I was there I learned to tell stories to children. This year I returned to learn techniques for telling stories to adults. Just as before, a weekend spent among warm generous storytellers and expert insightful teachers opened new doors into a story, the Brothers Grimm tale of Jorinda and Joringel, that I have been intrigued by recently.

In among the strange and fantastical elements of Jorinda and Joringel: a deep dark forest, young lovers inexplicably saddened by a beautiful sunset, a young woman turned into a nightingale imprisoned in a wicker cage by an old fairy who communes with angels – quite unexpectedly I glimpsed myself and saw reflections of my own story. A time of restriction and frustration was lit up with a quiet new light and I was able to consider it with greater compassion while held in my desire to tell a true and better story. 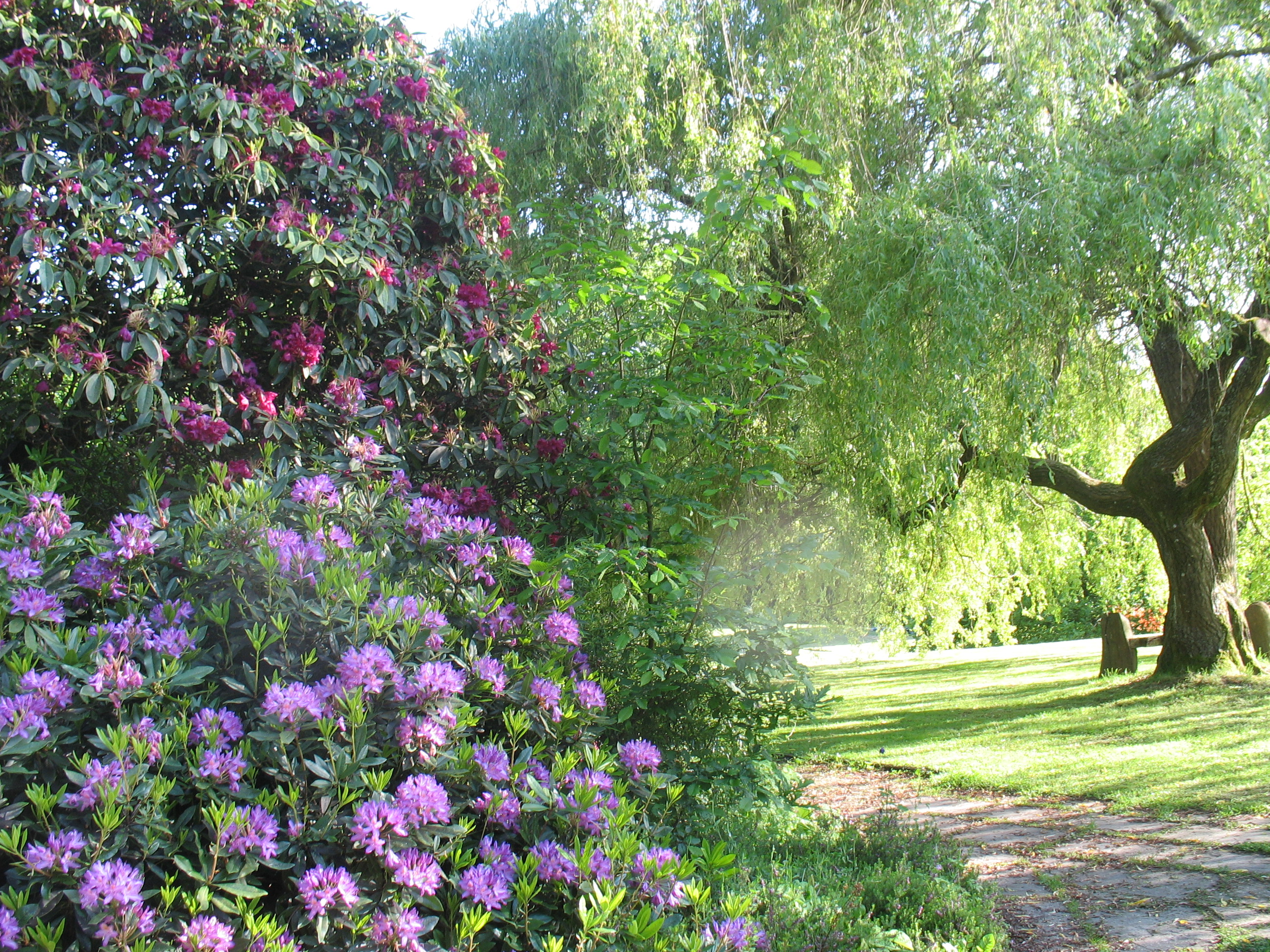 Somewhere in any story that one is drawn to, there are reflections of one’s own true self, sudden flashes of understanding lighting up unseen truths and gently revealing them. In the wondrous space of the hut and alone in your room afterwards, a story can lead on and on, revealing new questions and bringing out answers that arise as if from nowhere.

It is no surprise that many describe their time at the School of Storytelling as ‘transformational’. This is the true magic of the hut. It enables one to open, to find meaning in ancient tales, discover new ones and to hear anew those stories we carry deep in our selves.

With Spring just about to begin we spent a beautiful day at the Devonshire Road Nature Reserve to raise money for Syria – an event organised by the wonderful Fiona McDonald Joyce.

I told the story of The Goose Girl  but before that the children  made a story together choosing a character (person, animal or magical creature), an object and a second character from the Goose Girl: Princess, Hat, Horse.

An astonishing tale resulted, of a horse that put on a magical hat which gave him spots, and a princess who tries to help him! So different from the tale of the princess setting off into the woods to go to her prince, and the maid who attempts to usurp her. The maid succeeds in deceiving everyone and is deposed only when the princess speaks out and tells her truth, her story.

But why would a princess agree to a lowly maid’s demands? Why would she fear her so much as to exchange clothes and her horse and even promise not to speak the truth when they reached their destination? This question has always niggled me – I found it difficult to accept that she did it through fear, and as I worked with the story, preparing to tell it, I suddenly understood: the princess agreed because she didn’t think for one moment that an explanation would ever be needed! After all, she had always been a princess and where she came from, everyone had known who she was. And she fully expected it to be the case when she and the cunning maid arrived at the new kingdom.

What a shock for her to realise that mostly people tend only to see one’s surface, to note only symbols and signs; they do not see beyond what is presented to them. One cannot hide one’s true self and hope to be discovered. Even the King, more perceptive than the others, needed to have the truth told to him, to be given the full story.

To reach our desires, our goals, the life we secretly want for ourselves, we must speak our truth. And like the King with his ear pressed to the stove pipe, we must listen well, and we must hear it.

Join us for a simple craft, story making and storytelling session

£3 per child (to include a puppet)

Our first Story Hug workshop was based around the idea of the doll as talisman, magical friend and inspiration. The children made beautiful peg dolls with drawn-on coloured-in clothes, all wrapped up against the cold in a soft felt shawl.

We then made up a story together using the doll and the figures of a girl and an old woman that I have been carving: the same story elements as in the old Russian tale of Vasilissa the Beautiful. However a very different story resulted- a surprisingly macabre one for a group of angelic-looking children: the old woman ended up trying to eat the girl for supper!

Luckily there was a happier ending in the story of Vasilissa the Beautiful which tells of a girl, Vasilissa, who is given a magical doll by her dying mother. The doll helps Vasilissa in times of need, and shows her the way to defeating her evil step-mother and Baba Yaga the sorceress.

It was wonderful to see the children so absorbed in the making of their own story and listening to an ancient one, leaving clutching the tiny wooden dolls they had brought to life themselves. Hopefully these have led to more stories…