We made paper dolls for a story, with an envelope house where they could live, secret and out of sight, living the quiet mysterious magical life of dolls.

Using story prompts: a girl, an old woman, a doll – the same prompts that might give us Vasalisa the Beautiful… 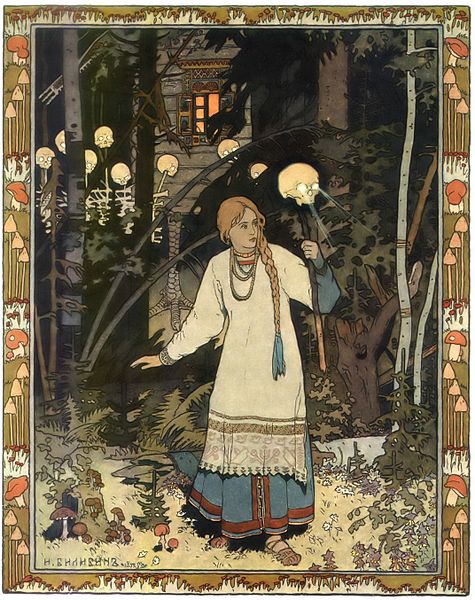 we made up the following fantastical tale, just me and the fantastic little storytellers in our story circle:

Once upon a time there was a doll who lived in a castle. She had been left in a cupboard long ago, in one of the many forgotten rooms of the castle and no one knew that she was there. All day long the doll talked. She talked and talked but nobody heard her – except for an old woman who came to sweep the floor of the room.

“Fairy party! Fairy party!” The old woman stopped her work and listened to the tiny voice.

‘I wonder where that sound is coming from – I think it’s coming from that cupboard over there,” the old woman said and opened the cupboard door.

She peered into the darkness, but her old eyes saw nothing. But as she stood listening to the voice go on talking, a little girl who lived in the palace went past and the old woman called her into the room.

“Can you hear that noise?” the old woman asked.

“It’s coming from that cupboard,” she said and they opened the cupboard door again and looked inside.

Well, the little girl always ate her carrots so she had very good eyes.

“There’s a doll in there,” she said at once and reached deep into the shadows at the back of the cupboard, bringing out an old doll.

“At last!” said the doll. “There’s a fairy party in the garden tonight! You’ll be allowed in if you take me with you.”

“Yes, let’s!” The old woman grinned. She had always wanted to go to a fairy party, ever since she was a little girl.

So that night, when everybody else was fast asleep, the old woman and the little girl holding the precious doll crept down the great stone stairs of the palace and the old woman opened the door to the garden. Far away, down at the bottom of the garden were sparkling coloured lights: pink, green, blue, yellow. They walked over the grass towards the lights and suddenly there were fairies fluttering around everywhere, beautiful fairies in floaty dresses, who they smiled at the old woman, the little girl and the doll and offered them lots of tiny delicious cakes and teeny biscuits.

Then they  danced and sang and played games with the fairies until the sun rose and the little girl and the old woman went with the doll back to the castle, to bed and wonderful dreams.

After that the doll was never lonely. The little girl took very good care of her and every time the fairies had a party they told the doll and she told the girl and the old woman and all three would go down to the bottom of the garden again to join their fairy friends. Each time they had a wonderful time, singing, dancing and eating fairy cakes all night long until the sun rose up in the sky.